Have you had an email fiasco where everything went totally bananas? Things you never meant to happen, happened. And you felt like hiding in some deep, dark cave, where no one could find you.
“Anything that can go wrong will go wrong.” So said a guy by the name of Murphy. And I believe him, because if anyone has had a super email disaster, I have. Keep reading, because if this ever happens to you, you’ll know what to do.
How Would You Like to Get 35 Emails From One Person?
One morning on a day I’d rather forget, about three years ago, I managed to send out over 7,000 emails in less than an hour. In effect, I accidentally sent out 35 emails to each of the 200 people on a particular list.
Here’s How My Horror Story Unfolded…
Back then, I was new to email. I didn’t have any software and no budget to send out email through an email based company. So we wrote a little do-it-yourself program that sent out an email to each individual address, without revealing the whole ‘cc’ list.
We were so proud of our programming prowess! All the names of the recipients were on that list, and the server picked them up one by one, sending the email to each individual.
Which Was Fine in Theory…
None of the recipients could see the other people on the list. They didn’t know that it had gone to 199 other people. But we hadn’t thought through the complete process. One unforeseen bug dialed Murphy’s number. When a recipient hit reply, our little program sent their message to everyone else on the list!
All it Took Was One Person to Hit the Reply Button
It just so happened that the first person who did, also attached a personal note to me. This personal note then went to all 200 people on my list. A client who got to work early saw it, and emailed me to say that she was getting my personal mail.
She too hit reply and sent her reply to 199 other people she didn’t know were on the list. Soon everyone began complaining by hitting reply, and thousands of emails danced our server dizzy.
As if that weren’t enough, the Take-Me-Off-Your-List Brigade started their charge, effectively turning a sunny day into a raging cyclone!
Not to belabor the story, we fixed the problem in an hour. But by then, the dastardly deed had been done.
However, Disaster is Only an Opportunity With a Nasty Name
Tons of people were now acutely aware of our Internet presence. This was a marketing scenario that had gone horribly wrong and needed to be turned around full circle ASAP.
A Little Humour, a Lot of Profit…
We followed the first rule of Public Relations. When in trouble, don’t deny your mistake. Grovel a lot, and then grovel some more. And then pull your rabbit out of a hat.
Here’s how we did it. A couple of days later, we sent everyone on the list our profound apologies with the following cartoon alongside. 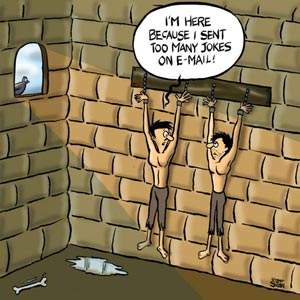 The cartoon that broke the ice and earned us US$5000 extra!
Some clients were so taken with this humorous gesture that they called me in to do business with them. Net result? We got business worth over US$5,000 as a result of this miscommunication. Friends were found through a fiasco fraught with faux pas.
Are You Ready for Mr.Wrong?
You should be, because no matter how much care you take, something will invariably go wrong. As our world becomes more complex, more things can go wrong — and will! Don’t let them catch you unprepared. Bounce back quickly — respond right away, confess your guilt and error, use humour.
And make short work of Murphy’s law.