At the point of writing this introduction, 5000bc has about 385 members
To the average person that doesn’t sound like much. But we’ve been selective about how we go about choosing our members. For one, we don’t promote 5000bc to our entire list, but rather only to those who have read The Brain Audit. This narrows the field considerably. And we don’t do any joint ventures or any adword campaigns. So the 5000bc membership is a select band of members who’ve decided to take a chance on us, and stayed. Many of the members have been around for years. Many have done several courses with us. In fact, working with such a small group has been a bit of a blessing.

I don’t know if you’ve ever been in the Cave
The Cave is the forum in 5000bc. On a bad month, the forum can tote up 1500 posts a month. On a good month, it spills into 2500 posts 5000 posts or more. The activity is frenetic, even with a tiny group of folks. And as you can tell, we’re in no hurry to get a whole new bunch of members. In 2003, we had about 70. Though all these years have passed the number has inched up slowly. But our income and free time has rocketed.

Remember how I was depending on my cartooning income to make ends meet?
In 2003, I eventually dropped the cartooning business completely. By mid-2004, we’d stopped doing most of our one on one consulting. All I do through the year is write new information in 5000bc, and in books and do courses. I barely speak at events, do little (if any) consulting, and well over 90% of our income comes from that list of 385 members. An income that has afforded us enough to buy a decent amount of property, have a nice bank balance, and be able to take time off three whole months in every year.

I’ve come full circle, I guess
The philosophy of 5000bc is ‘be kind, be helpful, or begone.’ And that’s the philosophy that has held through all the ups and especially through the downs. In good times and in bad, the community of 5000bc has held together. You see way back in the year 2003, I didn’t know why I was setting up a membership site. 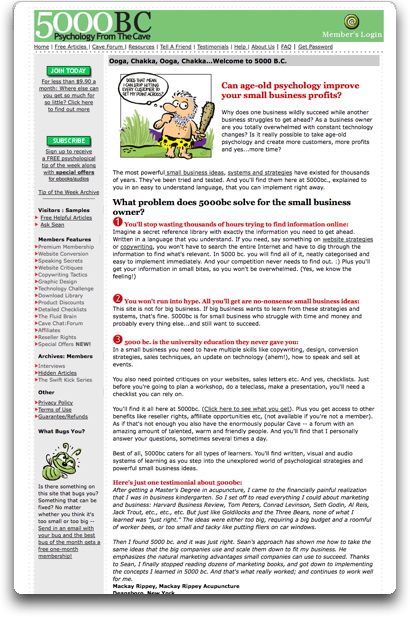 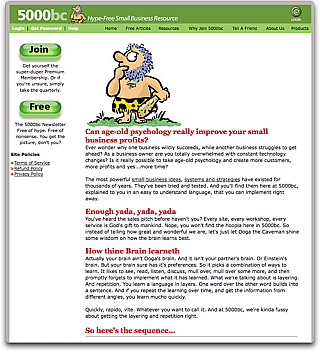 Caption 2: The new 5000bc website surfaces with Joomla-based technology.