At first I wasn’t so sure we needed a membership site
I was relatively new at the business of marketing. I was still running two businesses: cartooning and marketing. Well, not quite. I was actually running one business: the cartooning business. When I started out Psychotactics, and started selling The Brain Audit, I didn’t have a single client in marketing. Not online. Not offline. The sales of the Brain Audit bolstered me a bit, and I simply thought of 5000bc as another source of revenue (no matter how small). The cartooning business was still bringing in 98% of my revenue, and I was not eager to give up the revenue just yet.

I don’t know what quite happened next
The history is a bit of a blur, but someone must have bought the membership to 5000bc. Then another, and another. And by the time 2004 rolled along we had about sixty-seventy members at $7 a year. And then the year rolled over, and it was time for renewals and I increased the prices by $4—yes, for the entire year. And 50% or more of the members didn’t renew their membership. I was gobsmacked. $11 wasn’t much to pay, and though 5000bc was reasonably basic at the time, losing 50% was like half your audience walking out in the middle of your speech.

I called some of the members long distance on my own dime
Not the members who’d stayed, but the ones who’d left. I wanted to find out what had gone so horribly wrong. And this member said something that I’ll never forget. He said: Even if I pay 50c, it’s 50c. It’s 50 cents I could have spent elsewhere. Unless you create a better experience and more focused content, I would not renew my membership at any fee.

I knew something had to be done
But there was nothing I could do. You see I was busy spending several tens of thousands of dollars educating myself. In the first few years, I spent in excess of US$10,000-15,000. That may sound like a lot to you, until you consider that the New Zealand dollar was about 39c-45c to the US Dollar. This means that for every US Dollar I spent, it was costing me about $2-2.20. Those 10,000-15,000 dollars were more like spending a whopping $20,000-30,000 on your education. And after paying the mortgage, and paying the bills there was little left for any fancy software upgrade. Part of the problem was simply this: There was enough content in www.5000bc.com. It was just placed in a klutzy way and the overall experience was shoddy.

Then Visiongate rolled along
It was this whole new world. I could pay $100 a month, and there was this membership software that I could latch on to. A membership software that had all the bells and whistles—well they did look like bells and whistles at the time—and it didn’t cost thousands of dollars, just the $100 per month. This was like manna from heaven. I rejoiced, but probably too soon for the the learning curve was horrific. I spent well over two months working out just how to work the software. There were no tutorials (or very basic tutorials), and the people who ran the Visiongate software seemed to spend hours on the phone walking me through the software, but didn’t seem to put aside time to create video tutorials. But hey, I was willing to put up with the stress, if I could only move on.

And move on we did
I went to the existing members. I told them that I’d be raising the price. The price at the time was $24 a year. I had the happy job of telling members that from 1st Jan 2004, the price would be $97.22 a year—a whopping 300% increase. Again we lost 50% of the members. But it didn’t matter. The ones that stayed more than made up for the loss in revenue. And it told me one important thing: I was doing something right. As we stepped into this brave new world, 50% of my audience was willing to come along for the ride despite a reasonably unreasonable increase in price.

Of course we settled into a bit of a routine…
And then it happened. I was at Fox Glacier, at the bottom of the South Island in New Zealand. We were on vacation, and I stopped at this Internet cafe that only seemed to have intermittent Internet access. I remember it clearly. It was Feb 2005. And I read this email from one of the 5000bc members. Apparently 5000bc was down. I didn’t think much of it. During 2004, and even in 2005, the website went down many times, sometimes for hours on end. And on most occasions, there was little I could do but call Visiongate long distance. When my website went down, so did theirs, so there was little hope of sending them email. But even the phone call was often a waste of time as it would go straight to an answer phone. And no one would get back—ever.  So by end of 2005, I’d had enough of this drama, and was already working to host my own version of 5000bc. In fact, we’d started on the new website in November, but things got in the way, and it was February and the new website still wasn’t up.

But neither was the existing website
On previous occasions, it was a nuisance to have 5000bc go down for hours on end, but eventually everything would be restored. Not this time. One day passed. Two days passed. Three. Four. Seventeen days passed. And there was no site of 5000bc. What foxed me was that Visiongate was back and running, and so I got in touch via email. And then I got this sorry email. Apparently (and this is their story, not mine) someone had deleted all our data. And then made a backup of that deleted data. In effect I was looking at a web server with nothing. All the articles, all the forum posts—everything was gone. Not a pixel remained.

I was distraught
But that’s when I found my true friends. One of the 5000bc members created a Waiting Room. And the conversations that were in the forum at 5000bc, simply continued anew in the Waiting Room. As luck had it, I’d kept all the contact details of 5000bc on another site, and so I could email every member, explain the situation and then send them to the Waiting Room. Not one member complained. Not one asked for their money back. In fact, there were repeated emails to me asking how they could help.

5000bc finally got back up
Remember that backup website we were building in November 2004? Well, luckily we had saved enough data and backed up the forum (up to a certain date) so we could restore a shaky, but working website. The new website in Joomla was up and running again. And then came the long, tedious task of the learning curve again. I’d just got my head around how Visiongate worked. And now not only did I have to learn Joomla, but I had to make sure we populated the site to its original state. This meant putting back all the articles one by one (there were over 300 articles), as well as adding fresh content, as well as handling questions on the forum.

I didn’t sleep well that entire month
I’d sleep at 10pm, then wake up at midnight. Then at 1am. Then at 2am. Then groggy as hell I’d stagger to work at 4am. And this crazy schedule repeated itself for a whole month. But we got help from members. Whenever I asked for help, I received it. And slowly but surely I got more sleep. And the website staggered back to a better version of its original self.

The membership site as it was at the end of the year 2004. Note that the annual fee was still just $24 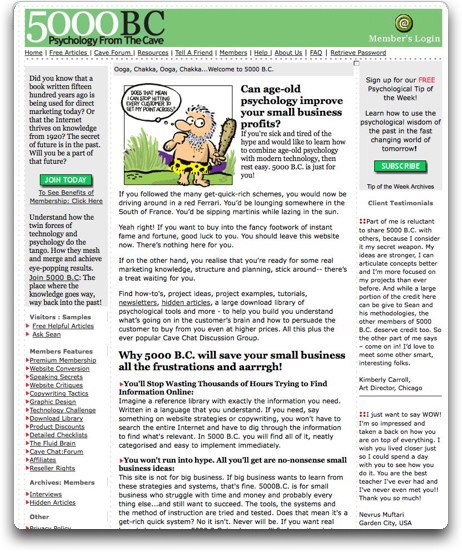