In early August 2002 we at Psychotactics, did something quite remarkable.
We sold our first copy of a book called ‘The Brain Audit.’  What was remarkable about this occasion was that it was the year 2002. The Internet was nowhere as spiffy as it is today. E-Commerce itself was something that people didn’t quite trust. And what made the sale even more dramatic was the fact that The Brain Audit was an anorexic 20 page booklet. It contained about 16 pages of content, and about 4 pages of filler material. To try and sell an e-book for $29 was insanity enough—and especially so because you could easily get a hardback book for a lot less.  The fact that the e-book was just twenty pages, made the sale even more bizarre, when most e-books (even back then) routinely ran into a hundred pages or more.

And yet, The Brain Audit sold. Not many at first. In the first month or so, we barely sold one. Or two.
Then the sales slowly started to pick up. But by Feb 2003, we still didn’t have a truckload of buyers for The Brain Audit. And yet, based on just those few buyers, we launched a membership site. The membership site was called 5000bc. The name was based on the fact that nothing had changed in human psychology for thousands of years. So we randomly picked a figure out of thin air, and said: Nothing’s changed for the last five thousand years, and so hey, let’s call this site 5000bc. Then in a bizarre stroke of madness, we put cavemen and dinosaurs in 5000bc. It didn’t matter than cavemen and dinosaurs had never existed in the same time period (Dinosaurs were extinct long before man started wandering around). And anyway, in 5000bc, man was reasonably well developed. Hey, beer was being brewed in 5000bc, rice was being cultivated, the plough had already been invented and water buffalo were domesticated. As if that were not enough, the wheel had already been invented. But all that doesn’t really matter when you’re telling a story.

And the story was one of Ooga the caveman, and the dinosaurs, and how they all lived happily in the improbable year of 5000bc.

At first the branding was all confused
5000bc was red in colour. At times it was referred to as 5000 B.C. At other times it was 5000bc. And at that specific point, we had no idea what you were supposed to do with a membership site. And not even sure why the membership site should exist. But it was the time when blogs were just coming out of the closet. And the earliest version of 5000bc was just that—a replicated blog. We’d decided that 5000bc would have some content. And so with a little fanfare and the crazy annual membership price of $7 (yes, seven dollars for the entire year), 5000bc went live. 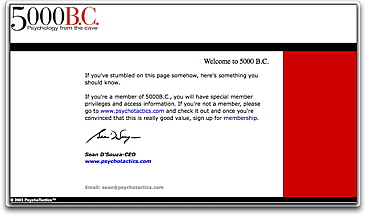 The website announcement that went up on March 28, 2003, was just a tiny announcement if someone was interested in buying. We’d sent several emails to the existing buyers of the Brain Audit, encouraging them to buy, and those who did would go to 5000bc and see this announcement). 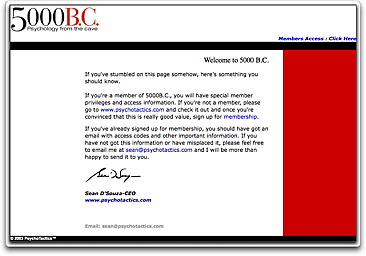 After a few weeks (possibly even a few months later) there was barely a change in the announcement. What did change was the login button on the top right corner. The site itself wasn’t done with any fancy software. The site was just an ordinary HTML site and every member had the same login and password.

Footnote: Once a year, on December 31, we’d change the password. At first this was klutzy. If you joined in November, your membership was only valid for 1 month. If you joined in Jan, it was valid for 12 months. But there was no way around this system. We had to change passwords and yes some folks complained, but surprisingly not too many complained because we explained the rules upfront. Besides the fee was just $7 a year. For their $7, members got a product worth $129 + other goodies (and yes, at the time, they got discounts too for some products and workshops). So it wasn’t a bad deal no matter when you signed up, but yes more people signed up at the start of the year than the end, as you can tell.